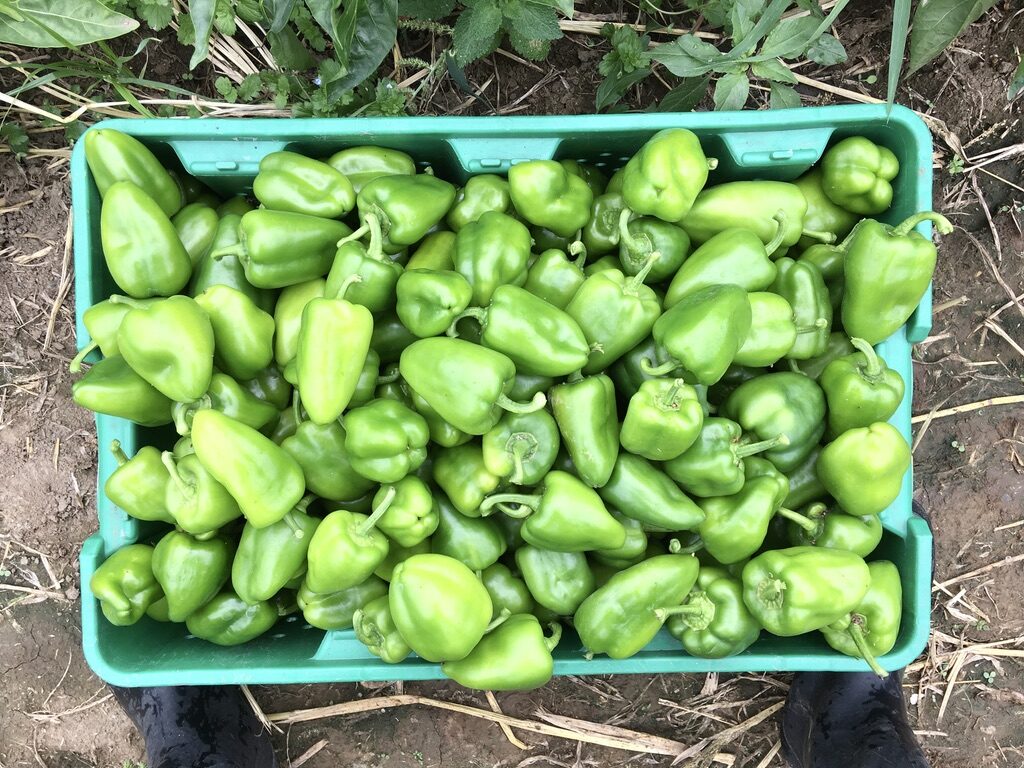 I just want to start out by saying the title of this newsletter refers to a memory — not to a serving suggestion. Green pepper season always takes me back to my time as an eater and a cook at Holden Village, a remote retreat center in the North Cascades of Washington.

For whatever reason, at Holden in the late 90s/early 00s, we cooked and ate a lot of green peppers. They were a staple ingredient in soups, casseroles and salads — and volunteers like me in the kitchen sliced and chopped them almost every day by hand. Since in the summers, we were feeding hundreds of people three meals a day, I remember chopping gallons of green peppers at a time. Literally gallons — we stored chopped vegetables in 4 gallon buckets in the walk-in cooler. Sometimes we’d chop multiple bins full each day. Chopping that many peppers, the seeds would become a challenge as they’d inevitably build up on the cutting board and start to feel impossible to get off the peppers.

But my most salient green pepper eating memory at Holden is of the “sandwich bar” we’d put out every morning for people who wanted to pack a lunch to take on a day hike. I will admit now that our packed lunch offerings were sometimes pretty limited. We only served meat twice a week at Holden back then, so there were no cold cuts. Instead, there was always peanut butter and jelly for folks who liked that option on their homebaked bread (which was never quite salty enough). Or for people who wanted something more savory, there was cheese. And homemade hummus (which was never quite salty enough). And sliced green peppers.

It was while working in the Holden kitchen that I first learned the mind-blowing revelation that green peppers are really just … immature red peppers! I’m not sure if I’d ever given much thought to vegetables at all before Holden, so it’s not as thought I’d actually wondered about the origin of green peppers. But still, this information felt like a revelation, as though someone had just shown me the man-behind-the-curtain of this common ingredient in our communal mountain diet.

But as I’ve spent more time learning and working with vegetables, including years and years of reading seed catalogs and growing different varieties, I’ve realized that the “green-peppers-are-just-immature-red-peppers” theory isn’t quite true. Because many vegetables are savored at different maturity levels. For example, I would never say that green onions are just immature dry onions; or that summer squash is just immature winter squash. While those vegetables are the same species; they clearly have been bred and grown to fit very different culinary roles. Likewise, a fresh fava bean is a very different food than dried fava beans. And green beans are different than dried beans. The difference is more than just maturity level, and usually we grow different varieties depending on our culinary goal with all of these.

It is also true, that we can pick most of the sweet peppers when they are in their green state and they are quite delicious. However, there are varieties of green peppers that have actually been bred to be picked as green peppers! And from a culinary standpoint, green peppers offer something unique from a mature colored sweet pepper. A fully mature sweet pepper will generally be much sweeter than a green pepper, and this is course part of their appeal. I mean, people like sweet things. But if “sweet” were the only desirable flavor in food and drink, a whole lot of strains of wine grapes wouldn’t even exist since they are less sweet than others! But of course there is a whole thriving wine industry that exists to promote other flavor profiles.

What happens when we dial back the sugar in a food? We can better appreciate other flavors that might underlie the sweetness but be hidden by it. I think this is the appeal of many wines, especially those produced here locally, and for me it is also the appeal of green peppers. Certainly green peppers and colored sweet peppers could be used almost interchangeably in most dishes, but there are times when I really just want to use the green version because I don’t want to build up the dish’s sweetness level. I’ve grown to really love the unique green flavor (and smell!) of a green pepper — especially when it has been sautéed well with onions and garlic in butter. That’s a good start to almost any dish, in my opinion. Interestingly, I find that I tend to prefer to use green peppers when the peppers will be cooked and mature colored peppers when the peppers will be raw. Again, different culinary roles call for different variations in maturity and varieties. And experiencing variety and diversity is part of what makes local eating so interesting and delicious to me!

It must be said that of course quality matters here a lot. The green peppers we were chopping (and slicing and dicing and chopping) by the gallon back at Holden were shipped in large crates from who-knows-where. I’m sure the varieties we were eating had been bred at least in part for their durability in shipping rather than for their flavor or texture. That is unfortunately true with much of the food sold, especially when it’s destined to be shipped long distances to institutional kitchens or grocery stores.

As a farm that harvests one day in advance for a very local market, we are able to focus our seed selection on varieties that have specifically been bred for their eating quality (as well as for their ability to thrive in an organic system — an important feature for us!). We are also able to deliver them with utmost freshness to our eaters. All of these features mean that our green peppers are actually pretty darn different than other green peppers. It’s too bad that CSA member so long ago wasn’t open to trying them to just see if maybe his mind could be changed.

(But actually, no judgment. We have learned that people’s tastes are very individual and even the most dedicated vegetable lover may have an item or two or three that he or she just cannot learn to love. It’s all good!)

Our harvest is still ahead of us this week, and I look forward to seeing which items really shine in their abundance and flavor. Late summer is such a delicious time of year!

P.S. I should add that we actually ate plenty of truly delicious food at Holden too, including vegetables and fruit from local farms — oh the fruit! Those local farms are why Casey and I ended up farming actually, but that’s another story. And suffice to say the sandwich bar was not necessarily the high point of the kitchen’s offerings back in the day …

A note about apples this year … friends, you may have noticed that our earliest apples have some new blemishes this year. We have noticed too and are disappointed. We are going to be doing some research to learn what we can do to prevent it in future seasons. So far we’re not seeing it in the later maturing apples, so we hope it will just be with these first few varieties. Since the Honeycrisps in particular are SO yummy, we don’t want to miss out on these apples. But because of the blemishes, we are going to increase the amount of apples we give out per item to make up for any bits that go uneaten. If you prefer closer-to-perfect apples, we understand. We’ll let you know when that time comes again.

Meet this week’s vegetables: SO MANY OPTIONS THIS WEEK! We’ve broken down the tomatoes by type this week so that you have a choice. There are the slicers, which are larger tomatoes (some traditional red and some heirloom types); roma/plum style, which are great for sauce or fresh salads; and the orange cherry tomatoes.

You’ll also notice some early signs of fall — notably the first winter squash of the season: spaghetti squash. We taste-tested one last week, and it was so delicious. We served it with a tomato/meat sauce on top. Yum! I also consider the arrival of the prune plums as a sign that fall is on its way. These are great for eating or for drying.

We’re taking a brief break from straight-up salad — this hot time of year is challenging for tender greens. But we have more growing for harvest again soon. And we have the cabbage again for making slaw. I also recommend making chopped salads with tomatoes, cucumbers, and mozzarella cheese (I made a big batch this weekend and we ate it all through the intensity of the heat wave).