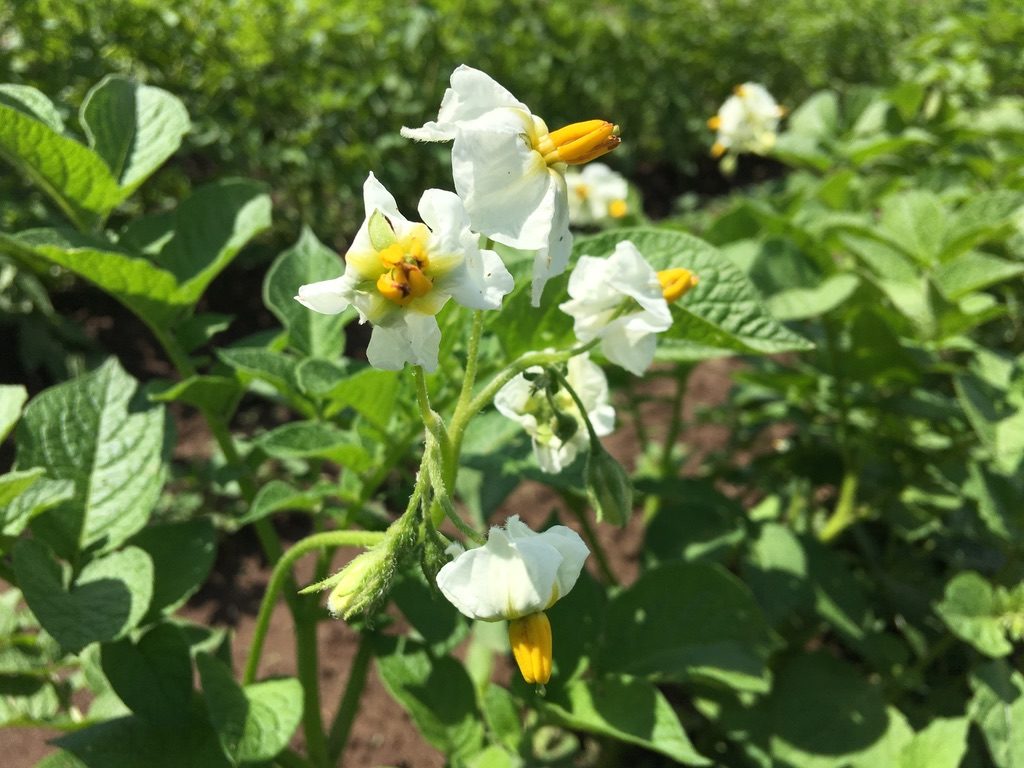 There’s so much I could write about this week, not the least of which is this July rain that’s surprised us the last few days! But the potato plants are in full bloom now, and in their honor, I thought I would share some random potato facts with you all this week.

First of all, yes, the potato plants are blooming, but just in case I confused anyone with this detail, I will clarify that potatoes are tubers — they grow under the ground, at the ends of roots from the plant. It’s actually quite fun to dig through the loose dirt and find potatoes, such as this afternoon when Casey and I harvested beautiful bright pinkish red skinned potatoes from the brown earth.

Potatoes are propagated from cut potato tubers too, which are buried in the ground and then reburied as the plants begin to grow, forming a loose “hill” of earth in which the tubers can form easily (and loose enough to dig through at harvest time as well). As we dig for the fresh new ones, we still see the remnants of the cut pieces of potato that we planted this spring (with CSA member help!). But though the blooms don’t end producing useful (to us) fruits or seeds, the flowers still signify a certain level of maturity of the potato plants. We know that when we start seeing blossoms, we can begin digging for potatoes.

Though there are enough good-sized potatoes for us to dig this week, the plants will continue producing bigger and more potatoes for several weeks to come. As the season goes on, the volume of potatoes that we will dig from each plant will increase until the plants themselves reach their maturity and then begin to senesce at the end of the season. The plants will begin to lose their vitality and will eventually be killed by the arrival of cold.

Before the plants finally die, they will have produced a large handful of potatoes per plant, and even after they are doing growing potatoes, the potatoes benefit from extra time in the ground to “cure.” This is simply the extra time between maturation and harvest, which allows the skins on the potatoes to grow slightly thicker so that when we harvest them for winter storage they won’t mar in our handling. The texture of the inner flesh also changes during curing and then again in long-term storage, which is why “new” potatoes (such as we have in this week’s share) have a different texture than winter storage potatoes. In our house, we love both variations and are glad for the difference experience over the season.

Potatoes originally came from South America and were only introduced to European diets in the 16th century. It took years before European farmers and eaters embraced the new crop, which is fundamentally different than familiar grains, both in terms of its cultivation and culinary value (though it has a very similar macronutrient profile, being primarily a source of starchy carbohydrates). In 19th century France, King Louis XVI and Marie Antoinette helped popularize the potato by wearing the flowers on their person (Louis in his buttonhole and Marie Antoinette in her famously coiffed hair).

Today, of course, it’s hard to imagine a diet without potatoes! Potatoes are certainly a staple in our house, especially for the kids. We almost exclusively roast them, slicing them into halves or quarters (or more pieces if large) and then placing them in a deep pan with liberal amounts of butter. We especially enjoy the results when we roast them in our convection oven at a very high setting (450° or so). We stir them a few times, and by the end, they are crispy on all sides — sort of a simple version of home fries.

As farmers, we love potatoes simply for their miracle-like growth and for their human-scale production. We tried growing grain crops years ago, and while they grew well on our farm, the harvest never felt simple. We often hired neighboring farmers to combine the grains, and we still then had a crop that needed further cleaning or processing in order to be edible. Oats, for example, grow well here, but they also need to be removed from their stalk (which a combine does) and then have their hulls removed. That process is called threshing and winnowing — which we learned is hard to do by hand on any volume or with very good results. We often found that our “cleaned” grains were still much less clean than what someone can buy at the store. Plus, then oats really should either by ground into flour or rolled for quick cooking. That’s just one example, but many grains have a lot of steps before the final product! I’m sure we could have fine-tuned some systems if we’d needed to, but ultimately we were convinced that grains are better suited to larger-scale, mechanical production.

In contrast, potatoes can produce a lot of the same kind of food on any scale, including our small scale. We can drop them into the ground by hand, planting as many rows as we need. And we can dig them quickly and easy by hand, needing only to wash them before putting them into storage. They do require cold storage for long-term keeping, but again that’s something we have achieved easily at our farm’s scale with two different home-constructed walk-in coolers that we run with hacked air-conditioning units wired to CoolBot devices. Along with a few other more starchy vegetables like winter squash and zucchini, potatoes allow us to grow vegetables that can really fill out a meal (and fill up the eater).