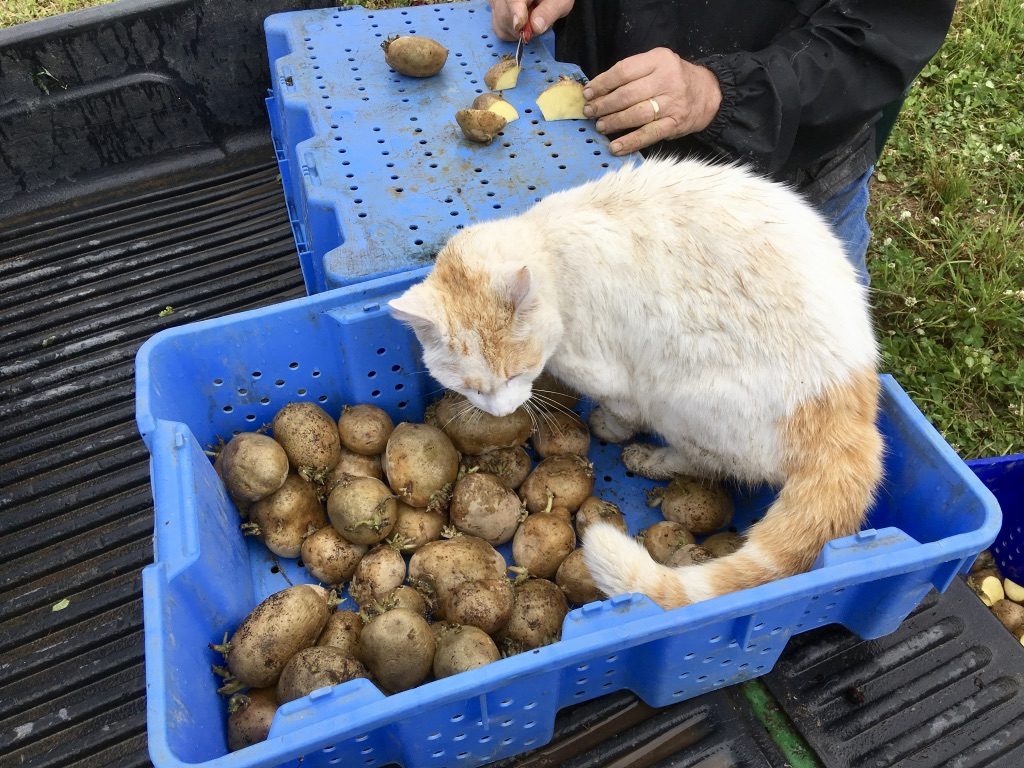 We had more kinds of helpers than expected with last week’s potato planting!

Last week, we got many of our “main season” crops planted or watched them germinate in the fields: potatoes, winter squash, tomatoes, and more! Because of our CSA’s long season (typically 40 weeks, although this year is shorter), we plant many times over the year rather than just once or twice at the beginning of the season. We sow/plant in late winter for early spring crops; we sow/plant in spring for summer and fall; and we sow/plant in late summer for fall/winter harvests. Each of those batches will actually be spread out over many weeks, so that we rarely go a week or two without some kind of planting or sowing project somewhere on the farm.

But, the main season garden — which is probably the closest to what most people grow in their home gardens in terms of types of crops and the season timing — is a big project every year. Several of these crops — such as winter squash, Brussels sprouts, cabbage, and potatoes — will actually feed us all well into the winter. But many are just for summer enjoyment, such as tomatoes and zucchini. Either way, they make up a big chunk of what we do every year, even with our extended seasons. So, it feels like a seasonal milestone to see them now growing in the fields!

The spring hasn’t been a fast or warm one — a few years ago we seemed to have several very early springs and summers in a row, putting us in the mind that the season starts very early in these parts! But this year feels more plodding. Plants that we planted during the last extended warm spell are growing … but not particularly fast. This last week has returned to gray, rainy, mild, and even a bit stormy at times (thunder and lightning!), which definitely affects the speed at which these new crops can take off.

We’re okay with that, for now. Everything looks healthy. There are places where we need to weed, which we will once the soil is dry enough again. But while we wait, we’ll continue to sow starts in the greenhouse (Casey just sowed a whole bunch of fall brassicas this weekend: more broccoli, cauliflower, and cabbage!), tend to what’s in the high tunnels, and begin thinning apples in the orchard.

Two new fun items in this week’s share: spring beets and strawberries! With some of these spring delicacies, we will need to put limits on them for now. Abundance is coming in general though. Enjoy this week’s vegetables!