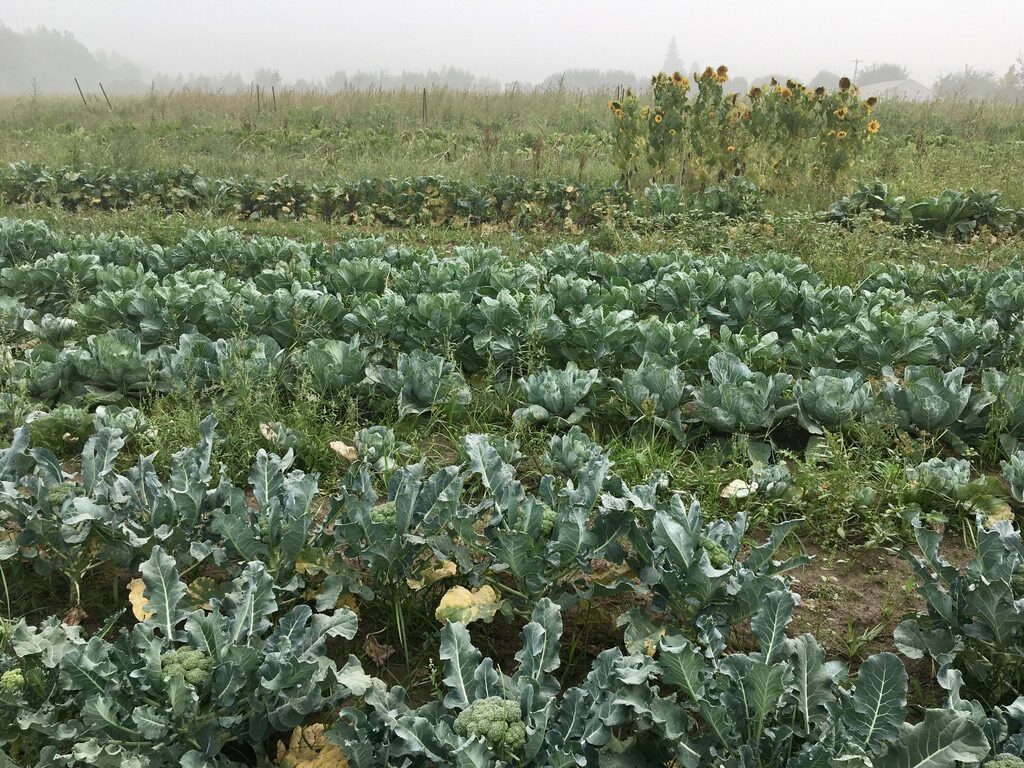 The field this afternoon: fall brassicas, sunflowers, and slightly-less-smoky-than-before air/sky.

It feels like a lifetime has passed here in Oregon since I wrote last week’s newsletter. That was just before the winds began to really pick up here. By evening, they were whipping through the Willamette Valley, causing our power to go out, branches and trees to fall, power lines to snap, and fires to ignite seemingly everywhere.

Our family decided to all sleep in the living room that night, ostensibly because of the potential of wind blowing down trees or branches against the roof of our upstairs bedrooms, but really Casey and I wanted everyone in one space in case we needed to get out fast. After the kids fell asleep, we gathered a few of the most important things by the door and then tried to sleep ourselves. I didn’t sleep much at all, disturbed by the sound of the intense wind and all that potentials it signified. It was intense.

But it was much more intense for many others in Oregon. Now that we’re a week into a major fire event, we have a better sense of how damaging that night really was. Many people did flee their homes that night — and some didn’t make it out in time. As the fires grew over the next few days, more and more evacuated, including Casey’s family in the Lincoln City area. Even more were put on warning for future evacuations, including all of Clackamas County. Many are still waiting and watching as the fires are not contained. 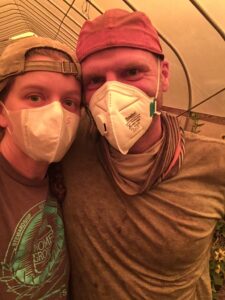 Wednesday, harvesting in the dark

Our air has been full of choking smoke and ash all week. As you know, we did harvest for the CSA last Wednesday with masks on. It was so dark that day that it was hard to even distinguish green peppers against the green foliage. When we would come in from harvesting, our eyes would see all the lights in our house as blue because they had become so adjusted to the deeply red light outside.

It’s hard to even catch up with how much has been destroyed by this massive event, and it is still ongoing. The guest cabins we always stay in at Breitenbush Hot Springs for a farmer gathering have all burned down. Many other such retreats and cabins and get-aways have met a similar fate. Hundreds of houses have burned as well, leaving a large population of Oregonians without homes.

The rebuilding will be a massive project, but we’re not even at that point yet. So many are still on guard.

Here on the farm, we’re starting to wonder about effects on the fields from the ash layer and the very reduced sunlight in these final crucial weeks of the growing season. These seem like minor concerns, but it is our job to be thinking about them and making plans.

Our hope now lies in the fall-like weather predicted for this week — even a bit of rain hopefully! Even today things look lighter out here, I assume because some of the slight breeze happening here is coming from the west rather than from the smoke in the east.

We have felt so many emotions this week — intense fear and worry, grief, anger, frustration. But we have been overwhelmed with gratitude for our home and for our family. There is a heaviness to our days, but it is a joy to live with people we genuinely cherish. 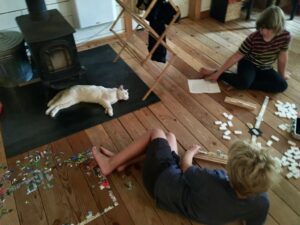 Keeping busy inside with puzzles, dominoes, and a sleeping Mokum cat.

And my heart has grown seeing how our two children have really coped amazingly well with their lives getting smaller and smaller and smaller this year — first cut off from friends and gatherings because of COVID and now cut off even from playing outside. I know it has been very hard for them, but they also understand that this is all part of bigger forces than our family. I would never have chosen for them to experience such intensely stressful events during their childhood, but I see that — as much as is possible — they are growing more empathetic, aware and loving as a result. Again, it hasn’t been easy, and there have been tears and frustration and major boredom this year. But they also now really truly know that the world is so much bigger than them. And they both eagerly wish for the best for all in that world.

Plus, they’re just so much more chipper than I feel many days. Dottie’s incessant happy humming is a balm to me, as is Rusty’s mooning me before bed. And, we’re here. Together. What a gift.

My heart goes out to everyone in Oregon and beyond who has suffered losses of all kinds this week or who are still living in limbo and uncertainty.