A week full of fall 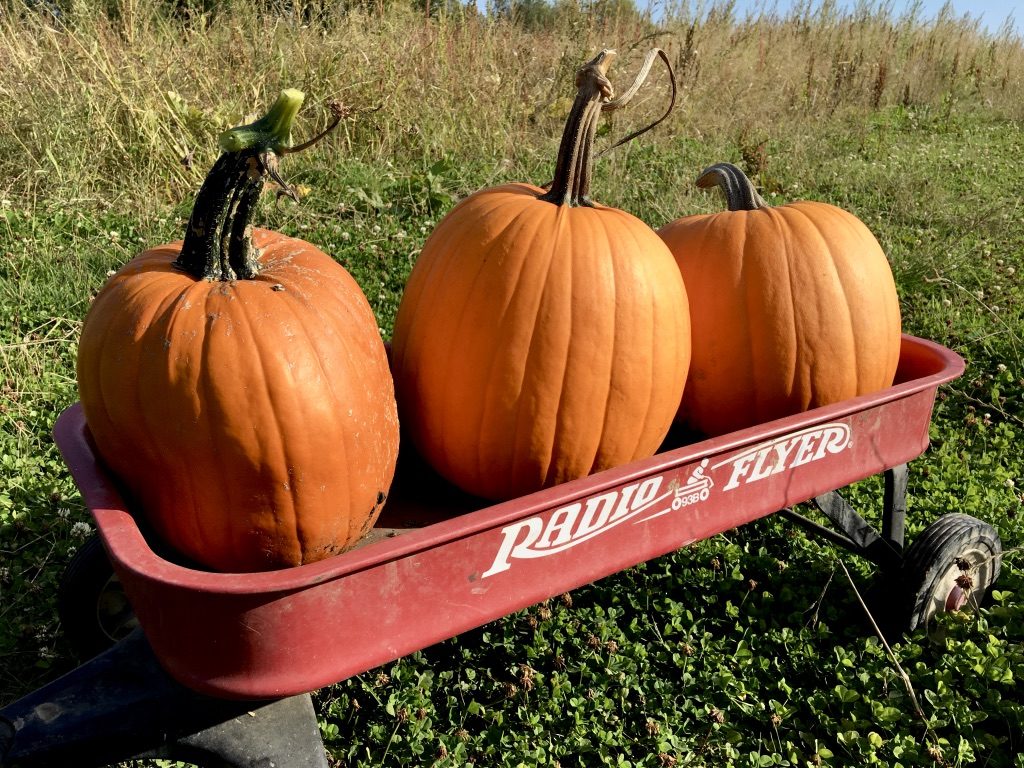 I love the seasons of change: spring and fall, the times when we shift most profoundly from dark to light and then back again. In each season, I find myself watching for the next sign of change. In spring, it’s the subsequent unfolding of flowers and leaves. In fall, the signs of the shift come in many forms.

Last week when the kids and I went on our nature outing at Willamette Mission State Park, we looked for various signs of fall. I was surprised by some of what we noted — phenomena that are definitely autumnal, but didn’t fit my typical list (and many that do!). We saw hops on the vine, nettles that had freshly sprouted thanks to rain, acorns and hazelnuts beginning to gather under trees, and of course the first of the crispy leaves falling on the path. 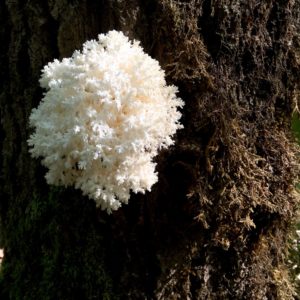 Since then, though, it’s been a fall-a-palooza around here. We built our first fire in the woodstove over the weekend in response to chillier temperatures. We found our first edible mushroom in the forest (and ate it! Yum!).

We also witnessed, for the first time in our memory, a migration of turkey vultures! Turkey vultures are regular summer residents here on the island, and we always delight in their return in spring (and have even noticed a few with particular wing markings who we recognize from year to year). But we’ve never particularly noticed the moment of their departure. Unlike Canada geese, turkey vultures are silent birds, and they don’t travel in such clear formations. Even when we saw them this weekend, at first they just looked like normal turkey vultures, circling on the air currents. Until we realized how very many of them there were circling, and we noticed that more and more were coming from the north and the whole swirling cloud was flying south (still in their circular soaring way). We can’t say whether any of those turkey vultures were “our” island neighbors, but it is certainly time for birds to begin migrating en masse, one of the greatest wonders of the natural world.

And, in terms of fall’s arrival, Casey woke up me this morning singing, “Ding dong the zucchini are dead!” Because we had our first frost on Monday, followed by another this morning! Although not unheard of, I’d say that frosts at the end of September and beginning of October are on the very early side. Our crops will all be fine. Anything that needs protection is in a high tunnel, and the cold weather will help our Brussels sprouts get sweeter (we’ll harvest the first of those tasty green treats soon!). 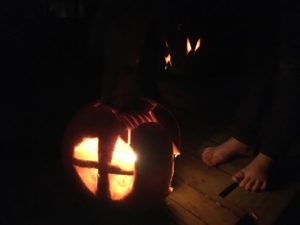 Trying out our pumpkins after dark

The kids are very excited about all of this cool fall stuff! They love this time of year. Dottie and I harvested pumpkins for our porch, which the kids have already carved! I doubt they’ll hold up through the whole month, but I’m sure the kids will be happy to carve more later too!

To share in the October love, we harvested the first of the pie pumpkins for this week’s share. They’re big enough to use as decoration and delicious enough to eat! (Or one and then the other!). If you’ve never worked with fresh whole pumpkins before, the easiest way to cook the flesh is to bake the pumpkin whole. Removing the stem will help it fit in your oven. We like to poke a few holes in the top to help release steam. Be sure to put it in a pan, because it will get juicy! You’ll know your pumpkin is cooked through, when you can very easily slide a paring knife through the skin and flesh.

Once it’s cooked, you can cut it open and let it cool. At that point, the seeds and pulp should come out easily with a spoon, and the skin will just peel off. You can use the cooked pumpkin in any recipe calling for pumpkin! Pumpkin bread, pie, soup, etc.

We will probably make something yummy with pumpkin this week, but I’m definitely scheduling a batch of beef and vegetable soup for the weekend. It’s been months now since we’ve made soup, and I’m ready! My standard soup is very simple: I cook beef bones and meat in the crock pot overnight (with just a few bay leaves), then strain the broth, pick the meat and add whatever veggies are around. Cabbage, carrots and onions are a favorite. If we have leftover rice from another meal, we’ll add that as well.

However you prepare them, enjoy this week’s vegetables!