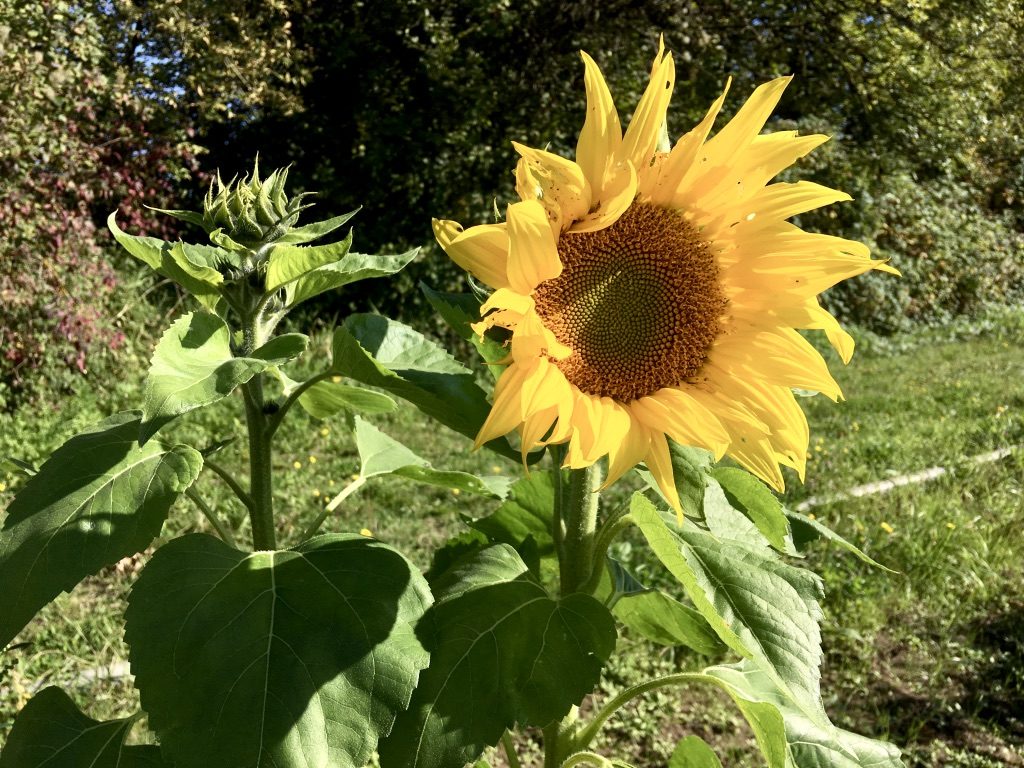 Just for fun: a late blooming sunflower in the fields on this sunny afternoon!

What a beautiful day for harvest! Casey and I enjoyed ourselves very much in the fields this afternoon. It was a treat to be in the warm sun, although there was still a chill in the air (and certainly in the shadows). Another frost is predicted for tonight, and I believe it!

Rather than waxing poetic about this moment on the farm this week, I want to share a story from the past that is culinarily appropriate for the fall shares. I’ve shared this story before, but it’s one of those stories I love telling over and over again.

A long, long, long time ago (probably around 2003 or so), Casey and I once lived in Bellingham, Washington and were young married students, still learning so much about the world. One of the things we were learning and thinking about was how to keep house in a sustainable way, including the importance (we learned!) of eating local vegetables in season. This was a very new idea to us at the time! There were cold season vegetables that we had rarely eaten and certainly never cooked before that we now noticed in the produce department. We knew we weren’t going to eat tomatoes in fall and winter anymore, so what would we eat? It turns out that we would eat vegetables like beets and carrots and potatoes and cabbages and leeks — staple foods for the cold seasons of our CSA.

So, one day I decided to buy several of these relatively new-to-me vegetables. Since we weren’t using plastic bags, I put them straight into my cart and then straight onto the check-out conveyor belt at our local food co-op. I lined them all up — potatoes, carrots, onions, beets, sweet potatoes, parsnips, and more — and watched them move toward the checker. As they moved toward the checker, I laughed and said, “Look, it’s a root parade!”

I have to admit, the checker (who was probably tired and uninterested) didn’t find my joke as funny as I did. But that night when we chopped all those vegetables and roasted them, Casey and I enjoyed the colorful and flavorful results of our “root parade” very much, and that name has since stuck around to be used anytime we roast a pan of mixed root vegetables (often plus other items too).

This is definitely the season for making root parade! It’s easy! You can include non-root vegetables too, of course (such as winter squashes, broccoli, cauliflower, peppers, even cabbage), but roots make a great foundation for roasted vegetables. Chop them into bite-sized pieces, keeping in mind cooking times. Beets, for example, take longer to cook than potatoes or carrots, so I chop them smaller. Broccoli and cauliflower are less dense and can be left larger.

Once everything is chopped, put it in a pan, being careful not to overload (or veggies will steam rather than roast), add butter or olive oil, salt, and then roast at a high temperature until everything is soft inside and crispy outside. You’ll want to stir occasionally during cooking. If you have a convection oven, definitely use the convection setting, as the moving air will help everything crisp up. So will letting the vegetables briefly stand out of the oven before you serve them up.

There are other wonderful ways to enjoy all these good fall foods too. Enjoy this week’s vegetables!