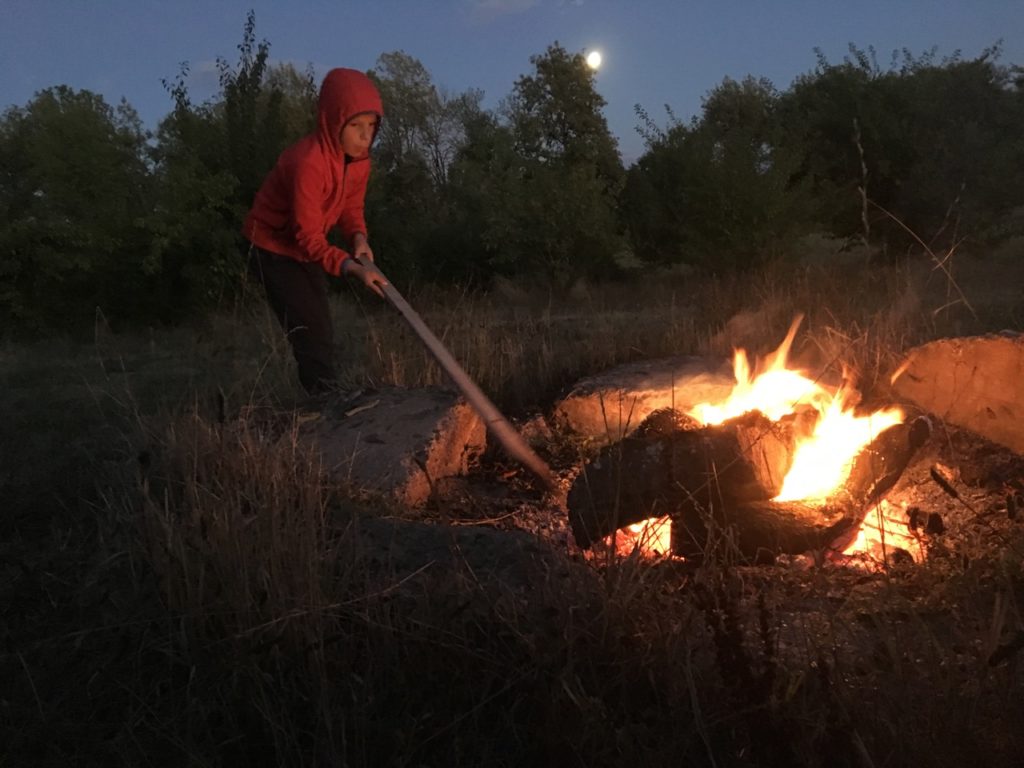 Does anybody else sometimes struggle with insomnia? I have experienced insomnia in the past — more so in certain phases of my life than others. Since I started putting CBD oil in my tea before bed, I’ve mostly slept very well all through the night (like everyone wishes babies would sleep), but earlier this week I found myself awake again.

Insomnia is such an interesting (and frustrating!) mental state — it’s not quite the same alertness and focus of daytime, but it’s not sleepy feeling either. For me, it really feels like an altered state of consciousness, one that is unfortunately prone to anxiety-laden thoughts and worries.

Thankfully, this week’s bout didn’t come with the usual load of angst, and instead I was just awake — my mind was spinning, recalling recent events, but in a neutral way. I decided to get out of bed (which is what the sleep docs recommend!), and stood for awhile on our upstairs porch. The moon was close to full, illuminating the landscape with silver light, but without my contacts in, I couldn’t see much beyond the large shapes of trees and houses.

Instead, in that odd nighttime state, I turned my ears outward, just listening to the layered sounds of the night here on Grand Island. This time of year, the most dominant after-dark sound is the rhythmic chirrups of the crickets. We only rarely encounter these insects during the day (I believe they’re very good hiders!), but at night they fill the air with their sound — one of the primary soundtracks of late summer out here.

But I also heard the calls of several Great Horned Owls, calling back and forth on either side of me: “Hoo hoo hoo hoo” “Hoo hoo hoo hoo” (with slight variation in the ending of the call and the response — difficult to transfer to words on a screen!). I remembered how loud the owls were around our house this time in 2012, when I was very pregnant with Dottie and preparing for her arrival. I remember getting up with Rusty in the night, and sitting with him in the dark with the sounds of the owls right outside our window. Little two year-old Rusty noticed too: “The owls are so loud,” he said.

I also observed that while the adult owl calls are loud as usual at night, I haven’t heard any juvenile calls this summer, whereas we have heard them in past years. A single juvenile would call periodically throughout the day, but especially right before dusk, offering a loud beeping sound to call to its parents for food. Sometimes we’d even hear the parents respond with their own calls. This summer, just the adults. I wonder why.

Closer to where I stood on the porch, I heard the nighttime rustle of birds in the Holly and English Laurel trees that grow by our driveway. Every night, dozens (hundreds even?) birds shelter in these trees. When they first come to perch in the evening, they fill the trees with the sound of their little evening greetings — not quite songs, but more like short chirped greetings and lots and lots of rustles of wings in the leaves. It can be quite loud, and we joke that the birds are having a party! They eventually settle down after dark, but at any point in the night, we can hear them slightly rustling — maybe birds just can’t be still, even in their sleep? We’ve witnessed some drama in these trees in the morning before, as Cooper’s Hawks sometimes come around to prey on the birds, even in their sheltered area — we’ve watched the hawks dive into the Holly and other birds fly out in all directions.

These three nighttime sounds I hold close to my heart. Out on the porch, awake, I felt less alone in the landscape, hearing these fellow creatures stirring or calling or singing.

But, beyond these animal sounds, I heard the other ever-present sound of summer on the island: the low rumble of an engine running, most likely running one of those very large sprinklers (known as “big guns” or “reel guns”). It’s a constant sound out here in the summer: reel guns irrigating fields 24/7. It’s a low sound that’s relatively easy to ignore (unlike some agricultural noise makers). I did hear other human-made sounds too: cars driving on the road; trains in the distance; and yes even an agricultural noise maker in a field (making predator roars to scare deer — actually pretty easy to ignore!).

As I stood there in the dark, awake but not really awake, I wondered what the audio landscape would be like without these ever-present human noises. What would it be like to just hear the crickets, the owls, and the sheltering bird rustles? What other noises would I hear that are too subtle in the current mix? I wonder.

For now though, Grand Island is very much a place both cultivated and wild. I love that about where we live, the juxtaposition of people working the land with the abundant habitat of being part of the Willamette River ecosystem.

Thankfully, I did end up falling asleep too! What a gift sleep is! But I appreciate those unexpected opportunities to experience our home in a different state too.